So... what's new? This past Sunday I ran the Virgin Money Virtual London Marathon. It was my 2nd Virtual race--- after saying how ridiculous they were-a virtual waste of time and money. That was before I realized that in addition to missing the US Open this year, I was going to miss out on running my favorite race- the New Haven Road Race, which went from a 20K to a Half a few years ago. The race fee wasn't much so I figured why not? I entered -at the last minute and promptly recieved my race shirt and number. I worked out a tentative course and headed out on the Saturday before Labor Day (the traditional race day). My course was somewhat different than my usual running route from my mother's house in North Haven, CT.
I started off on Rimmon Road, went up to Clintonville Road and out and back on Pond Hill Road, which turns into Clintonville Rd. in Wallingford and then back on to North Haven's Clintonville Rd. through Clintonville School and Chapel Hill. 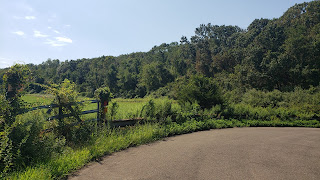 My time wasn't that good, but then I didn't expect it would be, however oddly I was pleased with myself for completeing this boring version of a race that's been a fall staple on my calendar since I started running...the 5K was my 2nd race-ever, back in 1993. 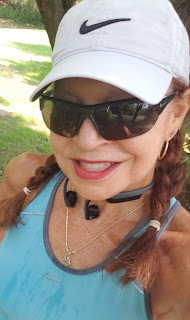 A few months before, after moving the London Marathon from April to October it was canceled and went virtual. Although, I wasn't registered for the original race, I opted to join in as London is one of my favorite cities and after applying for the "ballot" year after year, I finally gave in and became a charity runner in 2018 and completed the Abbott World Marathon Majors 6th star. It was such a great experience, I signed on with another charity, Sense, in 2019 and ran again. The opportunity to "fake" run London again, or as they put it -"participate in a historic event" was too tempting, I signed up for the amazingly low rate of 25 pounds and started my planning--
My Course- I decided it would be much easier to run in Las Vegas-there are so many parks and paths, it would be simpler to find a traffic-free route. AND even though it may be warm, like 90 degrees warm, it would unlikely be raining and humid which was most likely the case in Connecticut.
Cornerstone Park, where we ran the Jackport 6 or 12 hour run in February was my first thought....until I remembered the hills and the many walkers and dogs the park attracts every morning. The lack of shade also made me think it would be too warm and dusty. 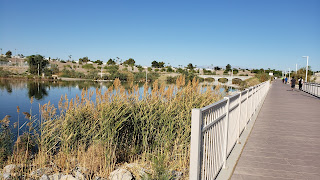 Second choice was the Pittman Was which combined with a few miles around the perimiter of Arroyo Mesa, my condo complex, worked well. There was shade, there were water fountains and even rest rooms-everything needed for a self supported race. I had planned to run 3 out and back loops, however in a last minute adjustment on the 2nd loop, I doubled up and the last 2 segments of the path-Pebble to Pecos and Pecos to Green Valley. 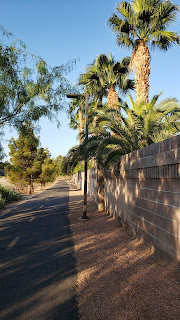 I started out with 4 loops around Arroyo Mesa and 1 half loop to finish up, amazingly without any "mapping" I came out with 26.2 miles and finished almost in front of my house. 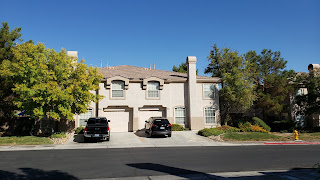 The Weather- The day started out great. Temps were somewhere in 60s at the start. As the day went on, temps rose to the 90s and the sun...UGH. I should have started at least an hour earlier!
What to Wear? I decided not to wear my number, as I thought it looked rather silly running through the neighborhood my myself. Comfort was going to be a key factor, so I just wore my black and white, Nike top with black Nike shorts and a white cap. Instead of my traditional race day hairstyle of braids, I simply tied my hair up in a bun.
The App and The Electronics- The race provides an app for you to track your miles and syncs into their system. Great idea! However I was worried about using it with my Strava-also tracking miles and streaming my music as well as the fact that I'm running very slowly and expected to be out possibly over 6 hours-the battery life of my head phones. What I ended up doing- another last minute decision, was to use my radio and wired headphones for at least the Countdown on KLUC and then switch over half way-- I ended up listening to the radio for the entire race.
The app was kind of cool. I didn't use the wireless headphones so I missed out on hearing the announcements and encouraging words however I did hear the last push to the finish line and congratulations -as I slogged myself to the "finish line", I heard the announcement that the Queen was watching out of her window and even Paula Radcliffe was watching as I "sprinted" toward the finish line. Ahhh, not really, however nice thought! 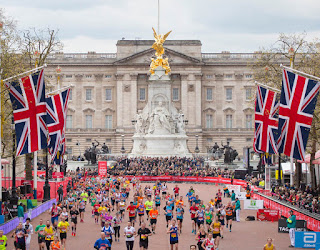 My Time- Could have been much better! My last marathon was LA on March 8 and it was aweful! I stopped at nearly every port-a-pottie for half of the race. I met up with Craig Davidson, a streaker-he's run every LA marathon however his claim to fame was running every day since 1978! Sadly, he was having a bad day and walked and talked with me for a number of miles. Unfortunately his streak ended back in April when he passed out getting ready for his run and ended up in the hosptial, rather than on the road that day. He's okay now and back on to starting a new streak.
I've been running every day since June, however my mileage has been 4 to 6 miles, nothing like marathon training! And to top it off, a week before the marathon, I bruised my ribs leaning over the bathtub washing my hair! Talk about a freak accident! It wasn't that bad that I couldn't run, however there is still quite a bit of discomfort.
All in all, the Virtual Marathon was a good experience, although, it was a tough time without the proper training and some injuries. Fortunately, my hamstring injury which caused my DNF in Berlin last year was not an issue, I barely noticed it. Only issues I did have were with my hip and back. I think with more stretching and weights, I can expect better results.
Will I do another virtual race? Never say never, I may depending on the race. It was a good training run for a "real" race, however it really doesn't give you the same sense of accomplishment you feel crossing an actual finish line---whether you're first or last, it's still an amazing feeling. Anyway, we'll see when the finisher shirt and the race medal- "bling" arrive, that may sweeten the experience. 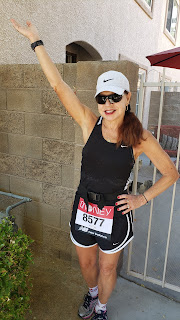