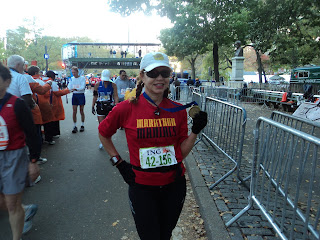 Who says you can’t go home? On Sunday, November 7th, I ran the NYC Marathon-my 9th time, but 1st since 2002. While living in NYC, I was able to run every year from the time I first began running, however, these days, it’s not so easy. With runners applying from all 50 states and hundreds of countries, competition for just a place on the starting line is fierce. To give you an idea, my registration number was in the 400,000s! I did finally get in this time by applying for the lottery 3 years in a row and not being accepted. After 3 rejections, the 4th year, you're automatically “in”.
The marathon was great as usual, exceeding my memories and expectations. Out of the hundred or so marathons, I’ve run NYC is much different than any other race. The experience is something that every runner should have. The energy is incomparable; the scenery, the sites and just the other runners make it unique.
First, it's NYC-the center of the universe and 2nd, everyone in the entire world turns out! From world record holder, Haile Gebrselassie to French tennis star, Amelie Ma 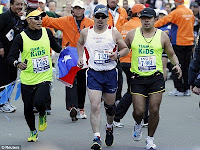 uresmo to none other than the rescued, Chilean miner, Edison Pena, who trained underground for 69 days... the field is amazing! I ran for miles without hearing English. 10,000 foreign runners make it somewhat of a UN summit meeting.
You wouldn't believe how many Achilles runners are out there-aside from the speedy wheelchair racers, there were many blind and disabled runners-all gutting it out with the rest of the field, looking forward to the joy they are going to feel as they cross the finish line, whatever their finish time.
As for my race, I got off to a bit of a shaky start---note to self, if you want to arrive at the very last minute, you have to know your way around!
We were nearly turned back to the ferry AND I was too late for baggage check. My friend, Paul, ended up running the first 3 miles with my gear bag! Not to pass up a stellar opportunity to "throw away shop", he picked up every name-brand glove and headband discarded by runners who arrived earlier (as instructed) and waited in the cold; he reluctantly handed the bag off to a friend in Brooklyn.
AND for a bit of TMI, I had to make 3 pit stops on the 1st half. The lines at the port-a-potties were at least 10 runners long and about 10 minutes waiting each time-not surprising as they were accommodating nearly 45,000 runners! Needless to say, my time was not quite my up to my goal, I felt “off” until the 59th Street Bridge. Somehow, I was able to rally on the 2nd half and managed to run (albeit slowly) the entire time.
At the finish line, I saw one of my friends from my old team in NYC--just like old times and another guy who I've known for years, Terry, working as a timer keeper at the 26th mile.
I was staying only one block from the finish line in Central Park, however due to the crowds, they reroute the runners miles out of the way just to exit the finish area. On the long, chilly (no clothes to change into) walk back to my hotel, I saw Paul finishing his last mile. I tried to cross Central Park South, however it was closed as runners were still coming through; he once again came to my rescue and opened the barricade to let me cross rather than walking an extra mile to where the marshals instructed me to cross--why didn't I think of that? I've already applied for next year. Hopefully, it won't be another 4 years until I can run again ,
Posted by ginger26.2 at 11:41 AM