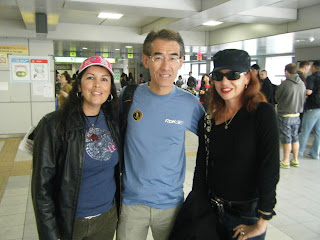 Tokyo Marathon
March 22, 2009
Konnichiwa! This March I had the opportunity to run the Tokyo Marathon on my fourth continent-Asia.

My adventure to Japan for the Tokyo Marathon began last summer. In its 3 year history the race has become so popular that they must use a lottery system. The application process begins in July, with entries closing at the end of August. If you are accepted you are notified in October and then asked to pay your registration fee in December-much different than US marathons, using the lottery system. Some have you pay upfront then issue you a refund if you are not accepted.
Last year they received over 200,000 applications for 35,000 slots. What would seem like impossible odds, apparently does not apply to foreigners. Out of our group, everyone was accepted.

I’m running a marathon every month so training is not so much of an issue-more import for this race was how to get there and where to stay, followed by what to wear-but I’ll get to that later.
With fares of $1000 to $1200 and a 13 hour flight, I decided that this would be a great time to redeem my frequent flyer miles. Luckily, due to current situation with the economy, it seems easier to confirm award space on the airlines; I had no trouble at all in booking a business class ticket.
As for the hotel, you have many, many choices in Tokyo; however my friend, LVTC member David Yung, recommended the hotel that he and his wife, Jeanne, planned to stay at-the Grand Prince Akasaka. This deluxe hotel, turned out to be a very well situated-across the street from a subway station and moderately priced-our room was approximately $136 per night.

I left Las Vegas on Wednesday morning, made a connection in Los Angeles and arrived in Tokyo on Thursday afternoon. There is a 16 hour time difference between Las Vegas and Tokyo, plus you cross the International dateline-which makes it a day ahead. I cleared customs easily and picked up a cell phone that I had reserved in advance which didn’t turn out to be as inexpensive as I had thought but was handy none the less and took some cash from an ATM.
Interestingly, international credit or debit cards are not widely accepted in Japan. Only certain ATMs, located at post offices and 7-11s, a big chain in Japan, will dispense cash. In fact, many shops and restaurants do not even accept credit cards, unlike the USA, this is a cash based society-credit cards are not used for daily expenses.

Soon after I arrived, I met up with, my friend Jennifer Whitley, who came in another flight. Jen, a former LVTC member, is now living in Tennessee. From the airport we took the Airport Limousine-a luxury bus, to the hotel. The airport is quite far from the city, as it was rush hour, the ride took us nearly 2 hours; our midday return took only an hour and ten minutes. The cost for this ride is about $30, other options such as a train would be less expensive, but not as easy and direct as the bus-especially with luggage, although they do offer a transfer service for the bags from the airport to your hotel. Cabs? Yes, they’re there too, however pricey at $200-$300, each way depending on traffic.
The next day David, Jeanne, Jen and I met our Japanese friend for lunch, Takahashi-san. He’s the Japanese runner that organizes the Canadian/ Japanese relay fun run that we do at the Honolulu Marathon each year. He has run Honolulu 22 times, however This was his first Tokyo Marathon. He hadn’t made the lottery for the earlier races. We got an early start on carbo-loading at a Japanese/Italian fusion style restaurant, Spaghetti-Ya, near Takahashi-san’s office.

After lunch we headed over to the Expo at the Tokyo Big Sight, a huge new convention center located across the river.
Getting around in Tokyo was very easy, once you got the hang of it. The subway goes everywhere, most of the signs are written in English as well as Japanese and the stations are numbered, so there is no chance for confusing the names. It was very similar to NYC, with a few major exceptions. First, there are several different lines, the Metro, the JR line as well as some private lines-the monorail we took to the Big Sight was one. Tickets are not interchangeable between the lines; the monorail ticket was about $4 each way, where the day pass for the Metro was only about $7. The other major difference, was the fact that the shutdown at midnight. If you’re out later you’d have to take a cab.


The Expo was amazing-almost as big as the LA Marathon or NYC! There were hundreds of vendors, representatives from other marathons as well as lectures and entertainment. We spent the entire afternoon here, by the time we got back to our hotel; we were so tired that we didn’t even eat dinner!

Saturday morning we had a “rehearsal run” in getting to the starting line. The start was in Shinjuko at the Tokyo Metropolitan Government Buildings, about 5 subway stops from our hotel. It only took about 15 minutes to get there. Once we were there we took photos outside where they were assembling bleachers for spectators to watch the start, then went upstairs to the 40th floor Observation deck and enjoyed a view of the entire city.
From there David, Jeanne and their friend, Luis from LA, went off to a park to see street performers and shop; Jen and I opted to visit the Imperial Palace Garden via the Tokyo Station. Later that night, we dined at an Italian restaurant in Akasaka on a side street near our hotel, home to about 200 restaurants.
Gotta get that pasta!

Sunday, Marathon morning, I was up at 5am; however we didn’t leave for the race until about 730a.
Last minute analysis of the weather and wardrobe, took probably an hour! I finally decided that there was a good chance of rain and the temperature would be in the 50s, so I’d wear pants, a short sleeve shirt and a jacket I could take off and tie around my waist if necessary. This worked out fine, in fact most of the female runners were dressed the same only with the addition of a running skirt over the pants-must be the running fashion in Tokyo!

Finally, we were off on a quick subway ride and walk through the underground tunnels, which got us to the starting area we just enough time to check our bags. The race didn’t begin until 915am however, as this is a point to point race, bags were stored in trucks and left for the finish line at 830am.

From there we walked/ran to our corrals. Each person’s number began with a letter signifying their
Starting corral-mine was F and David’s was J. I could have started back with David however I thought I may do better if I started toward the front of the pack. Unfortunately it didn’t happen. With 35,000 runners squeezed into one street, there was no moving up! AND with my limited training due to a knee injury, it really didn’t matter.

The race started under cloudy skies, no rain except for a few sprinkles until I crossed the finish line-at that point, the skies opened and it rained the rest of the afternoon and evening.

As we inched up to the starting line and crossed the mats, I couldn’t help but think of the NYC Marathon. After living in NYC and having run NYC as my first marathon, I usually compare all my other marathons to it. This marathon, more than any other reminded me of NYC.

The crowd of runners and spectators on the sideline never let up. The course was crowded from start to finish-even as the 5000 10K runners veered off at their finish line, you never had a moment where you weren’t surrounded by other runners. Only major difference was how clean the streets were and how polite the runners were. At each aid station, volunteers were divided into 2 tables –one for water and one for Amino Value, the marathon’s sports drink, each group actually wore a different colored jacket!
“Dust Bins”, large boxes and tarps for garbage caught the discarded. Those that were missed were collected by more volunteers on the side lines. The runners themselves were all very courteous-especially at the crowded water stops-each took their turn.

The course itself could be very fast-the first 10K is downhill, then it’s flat until the last 3 miles where you cross 2 bridges on the way to the finish at the Big Sight. For me it wasn’t, however not to have any major hills to contend with was a blessing for those, like me, who hadn’t trained enough!
Wind toward the last few miles over the water and long lines at the port-a-potties were the only deterrents to a fast time had you trained properly.

I finally got to the finish line at Big Sight way past my goal time, but happy none the less. Tokyo has to be one of the most well organized marathons I’ve run. I completed enjoyed the sights along the course-particularly the Tokyo Tower, a mini version of the Eiffel Tower, only in red! The “people watching” was pretty interesting, too-some very unusual costumes and running gear out there!
Once you crossing the finish line, a gauntlet begins-chip removal, medal, goodie bag, goodies—2 or 3 different fruits, drinks, and finishing towels! Yes, you get a commemorative beach-type towel; another custom, I suppose! A trip through the baggage claim and an enormous dressing room led to a long line of what looked like a communal pedicure chair, runners soaked their feet in what looked like a yellow sludge.


After the race, I wasn’t feeling well-probably from drinking so much of a sports drink that I wasn’t accustomed to. We took the subway back to our hotel, but first made a stop at Subway for a familiar sandwich and a chance to rest after a long day.

The following day Jen and I did a world wind sightseeing tour of Tokyo. Our first stop was Shibuya, to see the busiest intersection in the world, Tokyo’s major department stores and the famous statue of Hachiko, Japan’s most loyal dog. The story goes that Hachiko , an Akita, came to the subway station to meet his master every day, even after his death.
After that we went to the busy electronics street at Akihabara and then on to Ueno Park to see the Cherry Blossoms. Cherry blossom view is something similar to our “Fall Foliage” viewing: people will plan picnics and special trips to see them at various points throughout the country.
We were probably about a week to early to see them in full bloom, however we did get to see a few early blooming trees; they were gorgeous.
The next day we bid Japan “Sayoonara” and returned home. We were fortunate as this was, just a day after the Fedex plane crashed at Narita airport. After a delay of 2 hours we flew safely home.
Posted by ginger26.2 at 4:52 PM